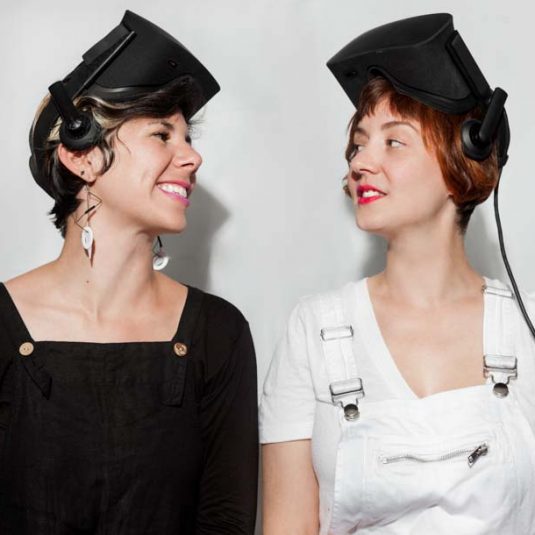 The Weekly Weekly Podcast #002: “The One With Sarah and Amelia”

Have you ever had a feeling so strange, you couldn’t find the words to describe it? VR artists Amelia Winger-Bearskin and Sarah Rothberg use VR to give you new metaphors for these yet, unnameable feelings in their piece ‘Your Hands Are Feet’.

Listen to the podcast #002 “The One With Sarah and Amelia”

Sarah Rothberg is an artist who captures the interplay between technology, systems, and the personal, creating meaning through unique and often strange interactions. Her immersive and idiosyncratic experiences are impossible scenarios that suggest other ways of remembering, thinking, understanding, and communicating. Sarah’s work has been exhibited internationally at venues including Sotheby’s S2 gallery, MUTEK festival, Mana Contemporary, and bitforms gallery. She teaches virtual reality at NYU (Tisch) and the New School (Lang). Sarah is currently a “Something in Residence” at ITP and working out of Future Space the rest of the time. She’s primarily working on two projects: The New News (a performance that uses VR to demonstrate a speculative future) and A Book of Poems for VR (exactly what it sounds like, a series that expands on this project she debuted at Gabe’s Sotheby’s show).

Amelia Winger-Bearskin is an artist, creative director, and organizer who develops cultural communities at the intersection of art, technology, and advocacy. She is currently the executive director of  IDEA New Rochelle, Interactive Digital Environments Alliance (IDEA) is dedicated to promoting, developing, and maintaining a vibrant new Creative Technology District in the City of New Rochelle’s Downtown Business Improvement District (BID). She is a member of the 2017-2018 cohort at NEW INC (the New Museum‘s cultural incubator). She recently was awarded the Engadget Alternative Realities Prize for her VR experience Your Hands Are Feet in collaboration with Sarah Rothberg.

More About the Project

After leaving the Sundance New Frontiers Story Lab of 2017 Amelia was contacted by Alycia Reiner, about producing a VR piece for the film she was staring in and producing Egg (also starring Christina Hendricks and Anna Camp).  The film is about a conceptual artist, and she wanted to show the artist had made a VR piece that would be cut into the film and also serve as a stand-alone VR piece they could show on the film festival circuit. After reading the script and tossing a few ideas back and forth with Alicia, Amelia settled on having a unique VR art project which was based on emotions someone feels when creating something new or embarking on a new creative journey.  She got together with Sarah who had been making VR projects while they attended school together at NYU’s ITP.  Amelia and Sarah embarked on the journey to create this project for the film and applied to the Engadget Alternative Realities 100k prize.  They were awarded the Engadget prize for Your Hands Are Feet and showed the project at the Alternative Realities Event in Los Angeles at the United Artist Theater, with Engadget at CES as well as at the Mint museum as part of Sundance New Frontiers Story Lab in Charlotte, NC.

The film Egg (the original title) was primarily filmed at IDEA New Rochelle IDEA Lab. It was exciting to not only create the VR experience for the film but to participate in its creation through supporting the film through Amelia’s, not-for-profit, IDEA New Rochelle, which  is dedicated to supporting creative technology in the downtown of New Rochelle. Providing a free set and set design and construction was a fun way to build the world of Egg in VR and in the set for the film.

Egg will debut at the Tribeca Film Festival

About Your Hands Are Feet the VR Experience:

Your Hands Are Feet lets you step inside impossible metaphors, presenting a reality where your head can be in the clouds, the whole world can crumble around you, you can be all thumbs or have two left feet (but really though).

Your Hands are Feet is an interactive room-scale VR experience and physical installation.

What if metaphors weren’t just figures of speech, but experiences you could have first-hand?

Your Hands Are Feet presents *brand new* experiences that you can to add to your vocabulary of common understanding.

Each experience introduces a surreal world that includes a unique interaction that is only possible in virtual reality.

Simple, playful, open-ended exploration progresses each experience to its conclusion, eventually returning you to the kitchen.

These experiences provide you with a new way of understanding feelings, so you might find yourself, one day, saying…