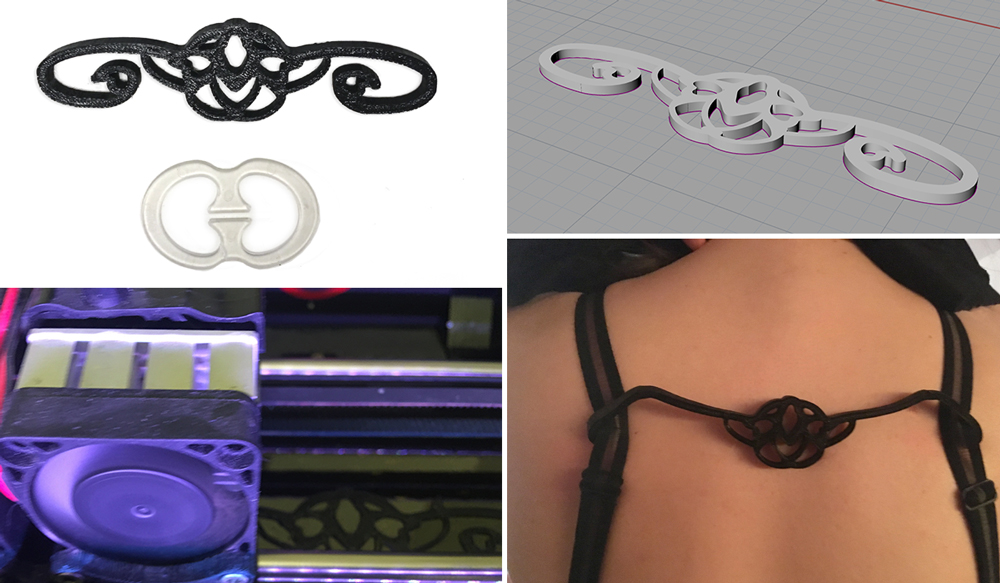 Sometimes you make a thing and it is hideous. I did keep working on it, though. I do not think the current incarnation is salvageable, but I’m still interested in making completely different versions. Since my first set of Weeklies is all about pounding out prototypes from a digital/physical practice, I figure it’s ok to make some stuff that goes straight in the trash.

The idea this time was to redesign the jim-jam (circular transparent plastic object) the nice ladies at the lingerie store sold me to prevent the straps of over-the-shoulder-boulder-holders from sliding off said shoulders. I felt like the object could have a more decorative form and still retain its function, and that a well-designed version could even become a kind of accessory.

I did several sketches, thinking of the line-work of Erte and art nouveau. I went into Rhino and popped out a fast model. I didn’t have the edges right (fillet problems) and wasn’t sure how thin I could print and still get a decent structure. I just decided to go ahead a make the thing, hoping that making it tangible would provide a better thing to evaluate. This turned out to be worth it, since it didn’t behave at all like I’d hoped, and on top of that it just reminded me too much of tramp stamp aesthetics to be redeemable.

I will probably try to redesign and reprint, with proper edges and PLA instead of ninjaflex. I still think the damn thing could be useful AND pretty, for lack of a better word.